My pregnancy with Henry was very smooth. My only complaints were the heartburn, morning (all day) sickness that lasted the entire pregnancy and the overall aches and pains that come with being hugely pregnant.
Since I had Winston and Tommy 5 and 3 weeks early, we all thought that this baby would come around 2 weeks early. My mother in law came into town on October 6th to help me get ready for the baby. After a few days of her being here, and no baby, I started getting desperate to start my labor. I was incredibly uncomfortable and not getting any good sleep. I went to a dr appointment on October 7th and discovered that I was really not progressing. I cried real tears. My mother in law and I started walking for about 2 miles every day to try to get labor started. 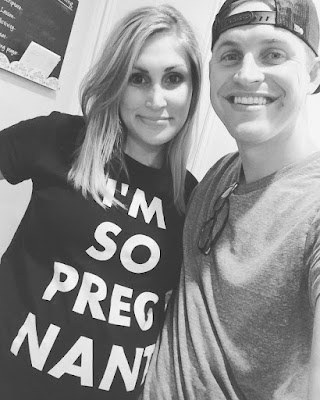 On October 14th I had another dr appointment. It just so happened that Steven got to come with me to my appointment, something I was really happy about.
At the appointment my dr told me that I was dilated to a 2 and a half and he was able to strip my membranes to try to get labor started. Since I was 39 weeks, we decided to schedule an induction for the next morning at 5:30.
After the appointment I didn't feel any cramping or contractions and was fully anticipating being induced the next morning. I got everything packed, put the big boys to bed and gave them extra snuggles. Steven set his alarm for 4:30am so we could get up and get ready to go to the hospital on time.
At 3:00 in the morning I awoke suddenly and went to the bathroom to pee (for the thousandth time that night). While I was in the bathroom I realized that I was having contractions. Not wanting to wake up Steven, I stayed in the bathroom to time my contractions. By 3:30 they were 5 minutes apart and I was in so much pain. I somehow got myself in the shower, shaved my legs and got myself ready to go. By 4:00 I went and woke up Steven to tell him that we needed to go, and I went scurrying about getting all the last minute things done. My labors have been very short and fast and I was nervous that I would have this baby in the car. I was in a hurry to get to the hospital. When I went back to get Steven, I discovered that he had fallen back to sleep. Apparently when I woke him up, he looked at his clock and realized that it was too early to go to the hospital for my induction (I forgot to tell him that I was in labor…). When he finally woke up, we rushed to the car and took the slowest drive ever to the hospital.
The walk from the car to the second floor of the hospital while having contractions was awesome. When we got to L&D the night guard asked us for our ID's so he could make badges for us. Not only did he take his sweet time while making our ID's, he totally butchered Steven's name. 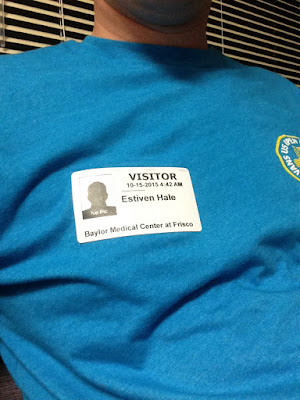 It was pretty funny. When we got to the front desk, I told them that I was scheduled to be induced but was already in labor. Luckily they already had a room set up for me so I did not have to go to triage. I got settled in and got checked. I was at a 4. Officially active labor! To be continued…